From Heraldry of the World
Your site history : Gateshead
Jump to navigation Jump to search 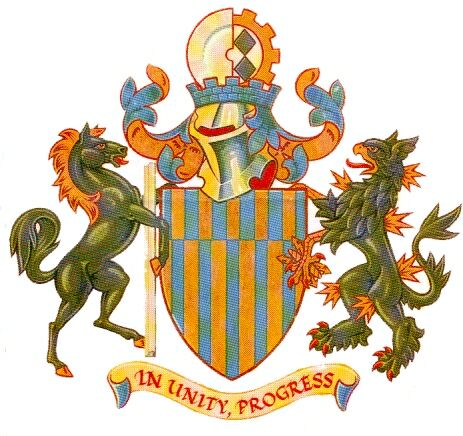 Arms : Or a Chief Azure overall five Pallets counterchanged.
Crest : Issuant from a Mural Crown Azure a Circular Blade of a Plough proper dimidiating an Annulet embattled on the outer edge Or containing two Fusils conjoined palewise Sable; Mantled Azure doubled Or.
Supporters : On the dexter side a Horse Sable unguled and maned Or supporting a Length of Rail Argent and on the sinister side a Male Griffin Sable armed and membered Or holding in the sinister foreclaw a Thunderbolt Or.
Motto: 'IN UNITY PROGRESS'

The blue and gold pallets, form a pictograph of a gate (or portcullis), which when combined with helm (or head), represent the name Gateshead. The portcullis was a feature in the arms and crest of the former County Borough of Gateshead.

The mural crown, here coloured blue, is from the arms of the Durham County Council and represents the areas formerly in that county. The plough, half cog-wheel and black diamonds (coal mining) symbolise the amalgamation of the rural and urban elements in the new authority.

The length of rail is a reminder of the former importance of Gateshead as a railway centre.

The arms were officially granted on September 27, 1932.

I have no information on the origin or meaning o fthese arms. Any information is welcome !