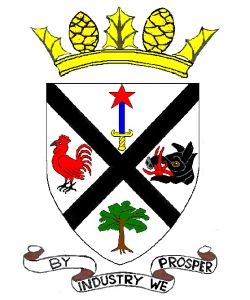 The background is white, like most old family coats of arms belonging to families associated with the area: Cockburn, Trotter, Gavin, Hog, Nisbet, Sinclair and Polwarth. It provides a very clear basis on which to tell our story.

The black saltire is from the arms of David Gavin, who bought the Langton estate from the Cockburns in 1758 and established the village of Gavinton the following year. This reflects the fact that Gavinton is the main centre of the GFPCC area. The saltire also provides a handsome way of subdividing the field.

The blue sword with a red star on the point is from the Gavin arms. It represents the self-made man reaching for the stars.

The red cockerel is from the arms of the Cockburn's of Langton, who held the Langton estate, a large part of the GFPCC area, for four centuries. Nowadays it stands for our 'get up and go' attitude.

The black boar's head with red teeth and tongue is taken from the arms of the family of Trotter of Charterhall, who have been the lairds of Fogo for many centuries. It also shows we are part of the Merse, where the boar's head has been used as a symbol for centuries. It is found, for example, in the nearby arms of Hog, Trotter, Nisbet, Gordon and Swinton.