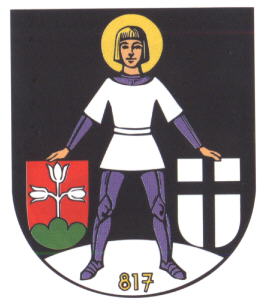 The arms show a knight, holding two small shields and in the base the date 817. Historically the region was owned by the Fulda Abbey. This is shown by the small shields, one with the arms of the lilies of St. Simplicius, one with the black cross of the abbey. The date is the year the abbey was founded. The composition already appeared on the 14th century seals of the town.