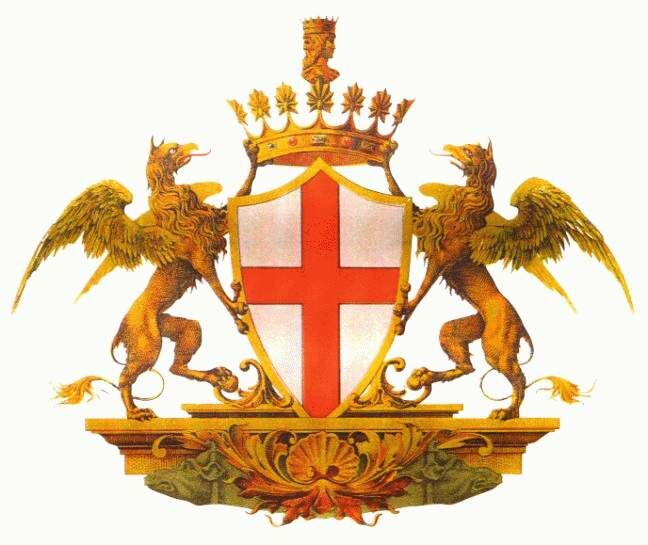 The cross is the red cross of St. George, patron saint of the city since the 7th century when Byzantine troops built a church for him in the city. Ever since the city has used the red cross on its banners (during the crusades) and arms.

The griffins were added in the late Middle Ages originally facing backwards and with the tail raised. When Genova was annexed by the Kingdom of Sardinia after the Viennese Congress (1813) the king decided that the griffins should face the shield and the tails were to be lowered. Whether this is a true story remains uncertain, the griffins are now shown in the proper heraldic way.

Originally Genova used a ducal crown on the arms, but after the annexation it had to be reduced to the crown of a county, as the capital of the Kingdom, Torino, also used only a county crown. Above the crown the head of the Roman God Ianus is shown, after which the city was named.

Since the fifteenth century, a second shield has been at times used side by side with the cross, but it never supplanted it and is quite forgotten. It was azure, on a bend argent the word LIBERTAS sable.