From Heraldry of the World
Your site history : Gent
Jump to navigation Jump to search 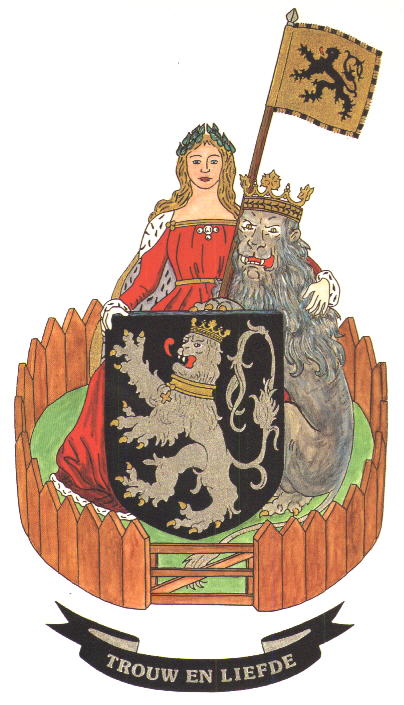 The great seals of the city never used the lion, but used the image of St. John, the patron saint of the city, with the Paschal Lamb. Similar seals have been used until the 18th century. The smaller seals, however, do show a shield with the lion. The oldest surviving seal dates from 1276, but the seal is likely older.

In 1482 two lions appear as supporters, together with the female figure. In the 17th century the arms were crowned as well. This was not in accordance with the rules at the time, and in 1632 the city was reprimanded by the Luxemburg King of Arms. The crown was removed again and the arms remained unchanged until the Napoleonic era. As a city of the first rank, Gent was granted a chief with three bees. The lion remained as the main symbol on the arms. The supporters and crown disappeared, according to the new laws.

After the independence of the Netherlands, the city received the upper arms above in 1817. According to the Dutch law, the arms were crowned with a crown with five leaves. The city did not apply for supporters, which were thus not granted (see image below). The arms remained unchanged until 1990, when the additional elements were granted (see above).

Besides arms with a lion, two different medieval arms were attributed to Gent. In the late 16th century a black shield with a silver glove was mentioned as the ancient arms for Gent. The glove, gant in French, was a canting element (the French name for the city is Gand). The name was traced to some Roman legend, likely made up by the author to extend the history of the city.

Similarly another 'Roman' shield was mentioned by the same author as historical arms. It was a black shield with in a silver bend the letters SPQG, or Senatus PopulusQue Gandavensis. This was obviously derived from the arms of Rome.
There is no historical evidence for any of these arms.

The Virgin of Gent first appears in a song written during the war with the Counts of Vlaanderen and the city of Brugge in 1381-82. In this song Gent is defended by a virgin and a lion, which is sitting next to her. Both sit in a small enclosure. Whether this song was based on a local tradition is not known, but the composition of Virgin, lion and enclosure starts to appear in all kind of sources, such as paintings, books and architectural ornaments. Except the official seal, where the female figure probably was derived from the Virgin. In the 16th century she was first shown with the banner of the city, later in the century with the banner of Vlaanderen. The latter probably indicating that Gent was the capital of Vlaanderen. Once, in 1641 the banner shows the legendary glove again...

Similarly, in the 16th century the Virgin and lion were combined with the true arms. She now acts as a supporter sitting next to or behind the shield. The enclosure disappears temporarily. In some images the shield is held by two lion supporters as well, creating a composition of a shield with a lion, held by two lions and a Virgin next to the shield, with a (natural) lion resting on her lap.

In the 17th century the whole composition was placed in a so-called Hollandse Tuin (Garden of Holland), a typical fence used by many cities in Vlaanderen and the Netherlands. Originally a symbol used by the cities in Holland proper, it is now only used by Gent (in Belgium) and Geertruidenberg in Noord-Brabant, not in Holland as such.
At first the shield with the lion was placed on the fence itself, with the Virgin, lion and banner inside the fence. Finally the whole composition was placed inside the fence.

Even though the official arms during these years never showed the Virgin, lion or fence, the composition appeared everywhere in the city. Not until 1990 the city adopted the whole composition as its new arms.

The motto Trouw en Liefde (Dedication and Love), first appears in the 16th century and has been used either in Latin (Fides et Amor) or in Dutch.

During the Napoleonic era, Gent was ranked as a city of the 1st Class and thus the city was entitled to use a red chief with three bees. These arms were granted by Royal Decree on June 6, 1811 and used until 1813.