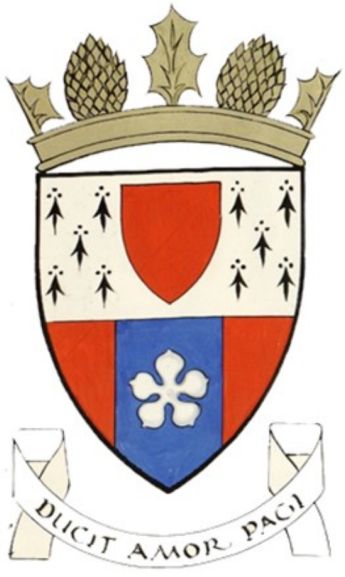 Per fess frmine and tierced per pale Gules, Antre and Gules, in chief an escutcheon of the Second and in base a cinquefoil Argent. Above the Shield is placed a Coronet appropriate to a statutory Community Council, videlicet:- a circlet richly chased from which are issuant four thistle leaves (one and two halves visible) and four pine cones (two visible) Or, and in an Escrol below the same this Motto "Ducit Amor Pagi".

Gifford, which is in Yester parish, has long and close connections with the Hays of Yester and the Marquesses of Tweeddale. It was the wish of the Council that its arms should reflect the Tweeddale arms (with their Hay, Fraser, and Gifford references); there are several examples in the village including one on the Mercat Cross.

The field reflects the Gifford arms (Gules, three bars Ermine), with Ermine in chief and Gules in base; the chief bears a Hay escutcheon; and in the base there is a Fraser cinquefoil or fraise on its blue field. The arms thus recall the Hays and the two important heiresses, Mary Fraser of Oliver and Joanna Gifford of Yester, who married into the Hay family in the fourteenth century.

The Latin motto "The love of our village encourages us" was a local suggestion; the word "amor" was chosen specially as a further reference to the Fraser and Gifford marriages.