From Heraldry of the World
Your site history : Glamorgan
Jump to navigation Jump to search 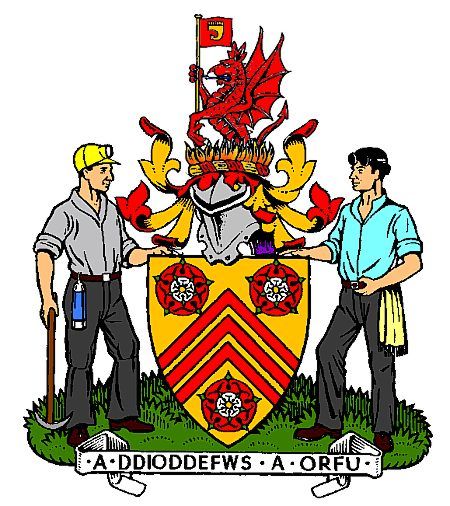 Arms : Or, three chevronels gules between as many Tudor roses, barbed and seede proper.
Crest : On a wreath of the colours, Issuant from flames proper a demi dragon, wings elevated and addorsed, gules, supporting a staff Or, flying therefrom a banner also gules charched with a clarion gold.
Supporters : On the dexter side a miner supporting with his dexter hand a pick, an on the sinister side a steelworker, both proper.
Motto: A Ddioddefws a Orfu

The arms were officially granted on December 15, 1950.

The gold shield with three red chevronels was the arms of the de Clare family, Norman Lords of Glamorgan. To these are added three Tudor Roses recalling the creation of the County of Glamorgan by King Henry VIII in 1586.

The crest has the red dragon of Wales supporting a banner with the de Clare badge of a clarion and rising from flames to suggest the heavy industry of the county.

The supporters are a coalminer and a steelworker.

The motto- A DDIODDEFWS A ORFU- He who suffered, conquered- motto of the lineage of Iestyn ap Gwrgant, is apposite to a region which has known the hardships of a livelihood wrested from rock, and from iron, and whose roots lie deep in religious experience.