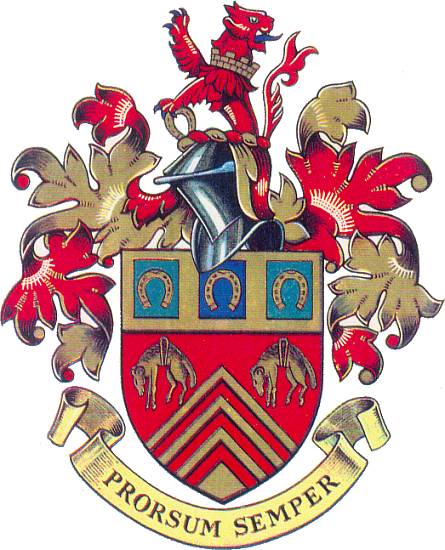 Arms : Per chevron Gules and Or in chief two Fleeces and in base three Chevronels counterchanged on a Chief of the second a Billet Azure between two Billets Vert each charged with a Horseshoe Gold.
Crest : On a Wreath of the Colours a demi Lion reguardant Gules gorged with a Mural Crown and resting the sinister paw upon a Horseshoe Or.
Motto: 'PRORSUM SEMPER' - Ever forward

The arms were officially granted on December 10, 1935.

The three chevronells are taken from the ancient Coat of Clare, Earls of Gloucester. The golden fleeces are indicative of the wool industry.

The horseshoes symbolise the ancient arms of the city of Gloucester granted 20th October 1538 and the Cripps and Allen families. Sir Frederick Cripps was chairman of the County Council and Mr Sydney Allen was High Sheriff in the year when the arms were granted, 1935.

The demi lion and mural crown are taken from a crest said to have been granted in the Commonwealth period to the City of Gloucester by Bysshe, Garter King of Arms. The grants made by this king of arms during the Commonwealth were cancelled on the restoration of Charles II.

The motto Prorsum Semper means Ever Forward and is taken from the arms of the Allen family.

Literature : Information and image taken from here with permission