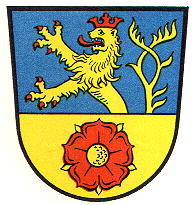 The arms were officially granted in 1970, but are based on the 13th century seal of the city.

The arms show a combination of the two symbols used by the Counts (later Dukes) of Geldern. The town got city rights in 1230 from Otto II von Geldern. All later seals, with one exception, show the combination of the lion and the medlar. Only one 15th century seal show the images of St. Margaretha and St. George with a shield with the arms of Kleve and Mark. Goch was transferred form Geldern to Kleve in 1473. At the time Kleve was combined with Mark, thus both arms appear on the seal of Goch. Later seals, however, show again the historical arms.

The different seals of Goch:

In the early 20th century the arms below were shown in the Kaffee Hag albums. These arms show the same composition, but in different colours. The additions in 1969 did not change the historical arms.

Kessel did not use arms. The two seals of the village show the patron saint, St. Stephen (+/- 1666) and the arms of the Lords of Driesberg (1786), who owned the village in the 18th century. Asperden was part of the Amt Goch of the duchy of Geldern since 1331, but did not have its own arms. The only known seal (1448) shows the patron saint, St. Vincent. Hülm also had no arms, only a seal showing St. Mary and Child, and a small (unidentified) shield.

Hassum and Hommersum were historically part of Asperden and did not have their own arms or seals.