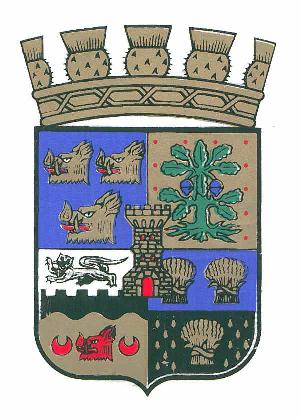 Quarterly: 1st, Azure, three boars' heads couped Or; 2nd, Or, semee of torteaux, an oak tree eradicated of ten leaves Vert, fructed of two acorns in fess Azure; 3rd, per fess Argent and Or, a fess embattled in chief and wavy in base between in chief an otter passant guardant Sable and in base a boar's head erased between two crescents Gules; 4th, per fess Azure and Pean, three garbs Or; overall at the centre point a tower Or masoned Sable, window and port Gules.

Above the Shield is placed a Coronet appropriate to a statutory District Council, videlicet:- a circlet richly chased from which are issuant eight thistle-heads (three and two halves visible) Or.

The arms recall the family of Gordon from which the District takes its name and the five burghs incorporated within it.

In the first quarter are the Gordon arms, three boars' heads in gold on a blue field; as there were two of these in the arms of Huntly.
The second quarter displays the oak tree of Kintore on its field of gold and red, and the third has a Meldrum otter, an Urquhart boar's head, and two Seton red crescents, along with the distinctive black fess, "embattled in chief and wavy in base", all from the arms of Old Meldrum.
The fourth quarter has the three Buchan garbs on a blue and pean field from the arms of Ellon.

Overall, at the centre point, is a gold tower (or castle) taken from the arms of Inverurie.