From Heraldry of the World
Your site history : Grävenwiesbach
Jump to navigation Jump to search 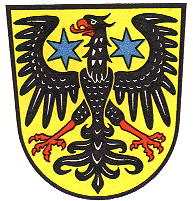 The oldest known seal of the town, known from 1534, but dating from the 15th century, already shows the eagle and stars.

All later images and seals have shown the same composition, which was officially granted in 1952.

The eagle is the Imperial eagle and indicates that the village historically was a free Imperial Estate. The origin of the stars is not known. The blue colour was chosen in 1952 as it is the colour of Nassau, to which the village belonged for many centuries.