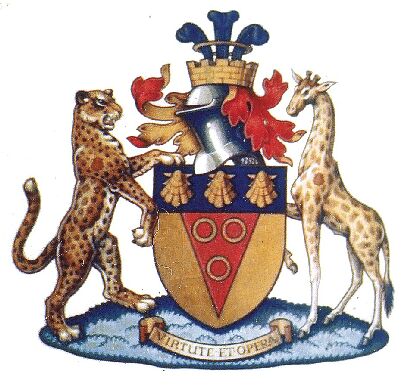 Arms granted by the College of Arms in 1912 and new arms registered with the Bureau of Heraldry in 1994.

The 1994 arms replaced the arms originally devised for the Grahamstown Municipal Council. The town was incorporated as a municipality in 1862. One of the council's first acts was to appoint a sub-committee to draw up a coat of arms, which was adopted in September that year by the council. 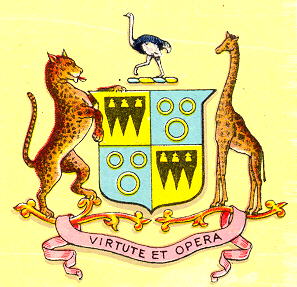 The first and fourth quarters are the arms of the town's founder, Col John Graham of Fintrie. The second and third are the arms of Jan van Riebeeck, first commander of the Cape of Good Hope. His arms were granted (suspended from an anchor) to the Raad der Gemeente Kaapstad (Cape Town Community Council) in 1804, and the three annulets were later incorporated into the arms of the Cape of Good Hope Colony (Cape Colony). The presence of Van Riebeeck's annulets symbolises Grahamstown as part of the colony.The leopard (Leo pardus) and giraffe (Giraffa camelopardalis) represent wildlife once common in the Albany district and seen as symbolising the wildness of the area when the British settlers first arrived in 1820. The ostrich (Struthio camelus) was also a frequently seen part of the area's fauna, and became commercially significant in the second half of the 19th century. In the grant of 1912 the ostrich became three ostrich feathers. These are wing plumes, which in nature only occur as pure white (on male birds) or white with narrow black stripes (on females). A black wing plume is one that has been dyed, and can be seen as a symbol of the ostrich feather industry.The motto, meaning "Courage and toil" is that of the Earl of Fife. The wording was seen as referring to the life of the early settlers.

The name Rhini is now the usual Xhosa name for Grahamstown. However, during the apartheid years it was used officially as the name of the municipality created to administer the black townships which had previously fallen under the administration of the Grahamstown Municipality. Moves were being made to adopt arms for the Rhini Municipality when in 1995 that structure was re-amalgamated with Grahamstown.

Literature : Information provided by Mike Oettle and taken from http://www.geocities.com/armoria