From Heraldry of the World
Your site history : Grant MacEwan University
Jump to navigation Jump to search 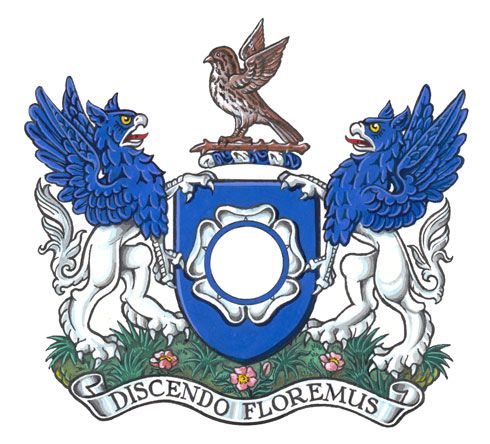 Blue and white are the academic colours of the University. The rose refers to the wild rose, the provincial floral emblem. The circle is a symbol of the never-ending process of learning, as well as of inclusiveness. As a circle, it also relates to the earliest inhabitants of the area and as a component of the medicine wheel, a First Nations symbol.

The sparrow was an important bird for Dr. J.W. Grant MacEwan (1902-2000), the University’s namesake and a former Lieutenant Governor of Alberta. It is mentioned in his personal creed, written in 1969. Its outstretched wings indicate aspiration and striving. The walking stick is something Dr. MacEwan carved and is now used as the University mace.

The griffin is the symbol of the University’s sports teams (the MacEwan Griffins), symbolizing courage, swiftness and excellence. The prairie grass and wild roses indicate Alberta.

The motto means “Through learning we flourish”.