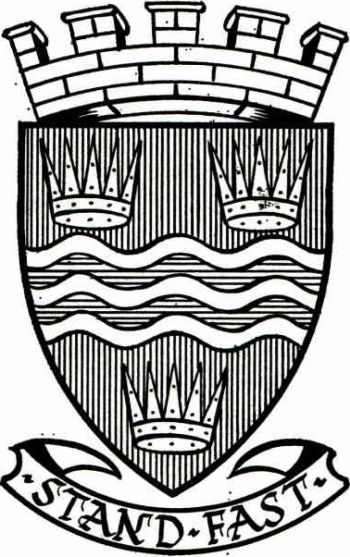 Gules, between three antique crowns Or, a fess undy of five Argent and Azure.

Above the Shield is placed a Burghal coronet and in an Escrol below the Shield this Motto "Stand Fast".

Grantown-on-Spey stems from the Burgh of Barony of Cromdale created in 1609 in favour of John Grant, 5th of Freuchie, and later transferred to Grantown, which in 1694 was erected into a Burgh of Regality for Ludovick Grant, 8th of Freuchie, later Grant of Grant.

The Burgh arms repeat the device on the Burgh seal, which was designed in 1898 by the Marquess of Bute.

The arms of Grant are differenced by a silver and blue wavy fess to denote the river Spey, on which the town stands. The motto is that of Grant.