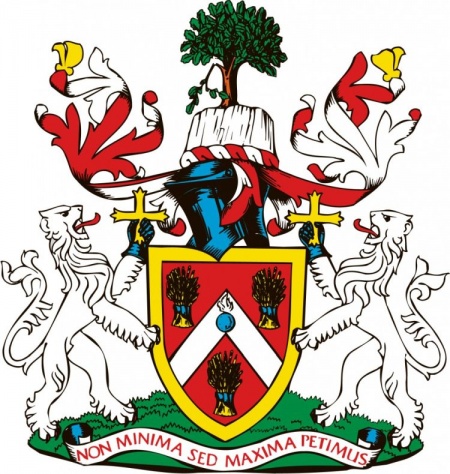 Arms : Gules on a Chevron Argent between three Garbs Or banded Vert a Grenade Sable fired proper all within a Bordure Or.
Crest : a Wreath of the Colours on a Limestone Cliff an Oak Tree fructed with broken branch and another growing therefrom proper.
Supporters : On either side a Lion Argent holding in the interior paw in a Steel Gaunlet a Cross Patonce Gold.
Motto: 'NON MINIMA SED MAXIMA PETIMUS' - Not the least but the greatest we seek.

The arms were officially granted on September 20, 1956 to the Aycliffe Development Corporation and later transferred to the Town Council.

Literature : Image and information send to me by mail