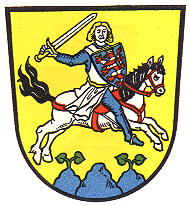 The arms were officially granted in 1939.

The town was founded around 1300 and the oldest known seal of Grebenstein dates from 1322. The arms show the count of Hessen (the small shield is the arms of Hessen) as a knight. The small linden leaves are probably the older symbols of the village, before it became a city. All seals of Grebenstein show the knight, although the actual composition changes somwhat between the different seals. The picture was first seen on arms of the town in the early 17th century, from thereon the colours are known.