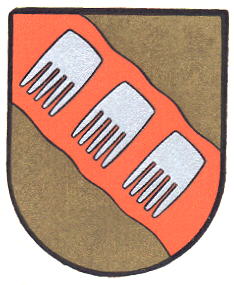 The bend with the three combs is taken from the medieval arms of the De Grevene family (von Greffen), known from a seal from 1336. In the arms of the village the bend was made wavy, to symbolise the many streams in the area, as well as the Ems river. As the original colours were not known, it was decided to use the colours of the State of Münster.