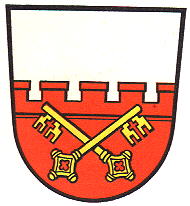 The arms were designed and granted in 1950.

The wall symbolises the fact that the village developed within the walls of a Roman fortified castle. In the 10th century the village and surroundings were a possession of the St. Peter chapter of Mainz, hence the two crossed keys, the symbol of St. Peter. The colours are derived from the colours of the State of Mainz, to which the village belonged from the 9th century until 1803.