Guild of Freemen of the City of London

GUILD OF FREEMEN OF THE CITY OF LONDON 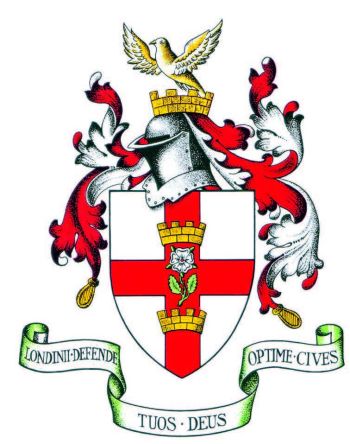 Arms : Argent on a cross gules enfiled in pale by two mural crowns or a rose of the first stalked and leaved proper.
Crest: Issuant from a mural crown or a demi dove wings expanded proper.
Motto: Londinii Defende Tuos Deus Optime Cives

The arms were officially granted in 1910.

The cross is the cross of St. George, exactly as used in the Arms of the City of London, and the white rose is taken from the Arms of Cuthbert Wilkinson, the first Master.