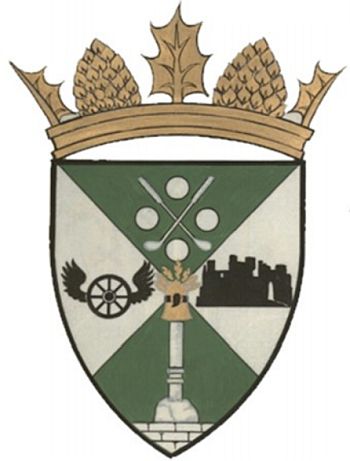 Per saltire Vert and Argent, in chief two golf clubs in saltire, heads downwards of the Last, cantoned between four plates; in base issuant from the base a representation of the Mercat Cross of Aberlady Argent; in dexter flank a railway wheel winged Sable; in sinister flank a ruined castle of the Last; and overall at the centre point, a garb Or banded Sable. Above the Shield is placed a Coronet appropriate to a statutory Community Council, videlicet:- a circlet richly chased from which are issuant four thistle leaves (one and two halves visible) and four pine cones (two visible) Or.

The arms show an heraldic representation of the four communities in the council. Dirleton Castle and Aberlady Mercat Cross indicate the medieval origins of the two communities Dirleton and Aberlady.

The train wheel and wings pointto how the railway fuelled 19th century growth and the air defence role Drem Airfield played in the two world wars.

Finally, golf clubs and balls symbolise the importance of golf to the area, many of the local first-rate golf courses regularly feature in listings of the world's finest courses.

The sheaf of wheat reminds of the importance of agriculture.