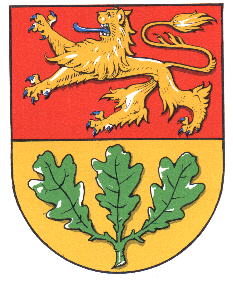 The upper half of the arms shows a lion. This lion was the symbol of the so-called Grossen Freien (or a large free area), and all municipalities in this area used the lion in their arms (see also Ahlten, Bilm, Gretenberg, Haimar, Harber and others).
The lower half shows some oak leaves for the Gaim area, a large oak-forest in the district.