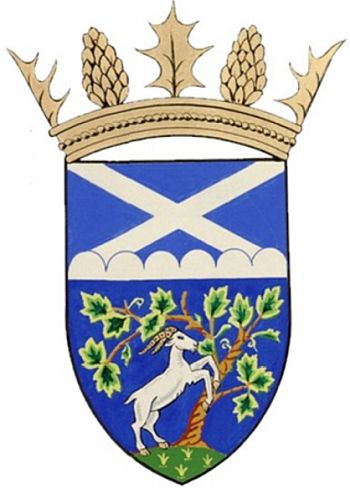 Azure, on a mount in base Proper a goat rampant contourntée Argent, attired and unguled Or, browsing upon a vine also Proper, a barrulet enhanced and invected on the top Ar$ent and in chief a saltire of the Last.
Above the Shield is placed a Coronet appropriate to a statutory Community Council, videlicet:- a circlet richly chased from which are issuant four thistle leaves (one and two halves visible) and four pine cones (two visible) Or.

The arms show in the lower half the arms of Haddington.

The saltire and the barrulet in chief represent Athelstaneford; they recall the legend, that during the battle of Athelstaneford in the eighth century, Angus, King of the Picts, and his army were inspired to victory over the invading force of the Northumbrian General, Athelstan, by the appearance in the sky of a St Andrew's cross, which, thereafter, became the distinctive feature of the national flag.