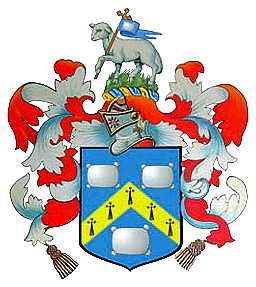 Arms : Azure a Chevron Erminois between three Woolpacks Argent.
Crest : On a Wreath Or and Azure upon a Mount Vert a Paschal Lamb Argent supporting a Cross-Staff Or flying a Pennant Azure charged with a Woolpack Argent; Mantled Gules doubled Argent.

The arms were officially granted on February 18, 1618 and continued by the district and town councils.

The woolpacks and Paschal lamb are emblems of the importance of the woollen-cloth production in the borough.