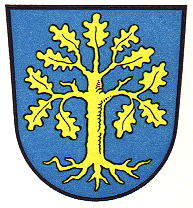 Hagen received city rights in 1746 from King Friedrich II of Prussia. At the same time the first seal is known, which shows a canting Hag (Hag or Wald, means forest). It was, however, also interpreted as a (natural) lily.

In the 19th century the city thus sometimes used arms with two lilies. On February 1, 1897 the present arms were granted, based on the oldest seal. Originally a mural crown was added to the arms, but this is no longer used.