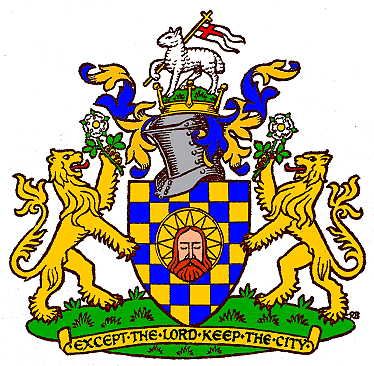 Arms : Chequy Or and Azure a Man's bearded Face affrontée [the eyes closed] surrounded by a Halo proper.
Crest : Issuant from a Saxon Crown Or a Mount Vert thereon a Paschal Lamb proper holding a Staff Gold flying therefrom a split Pennon Argent charged with a Cross Gules; Mantled Azure doubled Or.
Supporters : On either side a lion Or holding with the interior paw a Rose Argent barbed seeded stalked and leaved proper.
Motto: 'EXCEPT THE LORD KEEP THE CITY'

The arms were based on the previous arms, used by the borough since the middle of the 19th century, see image below. The arms show the face of St. John Baptist, which is a canting element (Holy-face, Halez Fax). His symbol, the Agnus Dei, is shown on the crest. St. John was also the parton saint of the wool merchants, and in medieval times Halifax was an important wool trading centre. St. John thus was an appropriate saint for the town. The chequered field is taken from the arms of the Earls Warenne, who held the town in Norman times. The Saxon crown in the crest indicates that the town has been in possession of Edward the Confessor. The supporters are the British lion, holdin a rose for the West Yorkshire county.

The motto 'Except the Lord keep the city' was taken from Psalm CXXVII.

The previous arms were nearly identical, but never officially granted. The motto is the same, but in Latin. 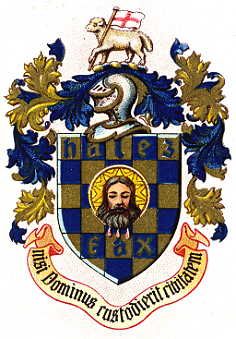