From Heraldry of the World
Your site history : Hamburg
Jump to navigation Jump to search 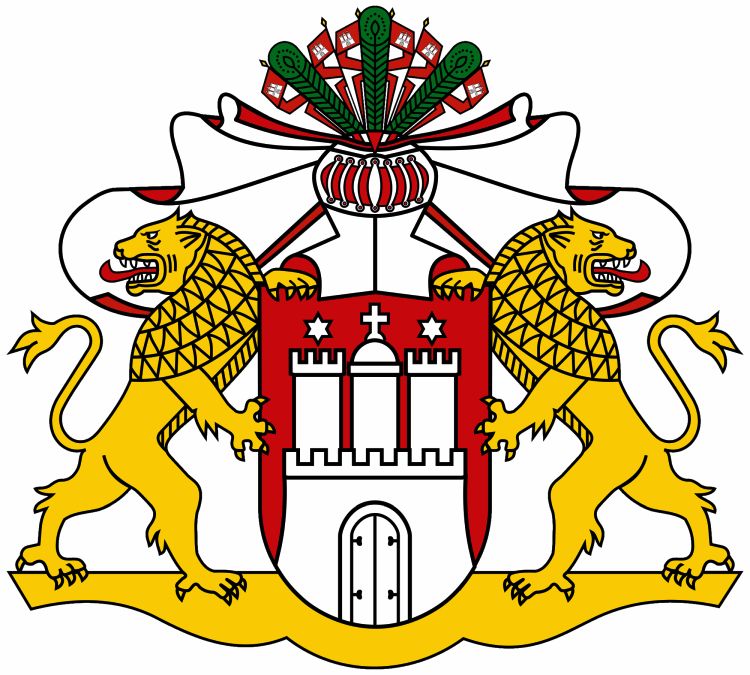 Hamburg developed around a small fortress, used by the people as a refuge in the early Middle Ages (6th-9th century). In 831 an Archishop of Hamburg was mentioned, in 835 already an Archbishop. It is not quite sure when the village became a city, probably in the early 12th century.
In 1188 the new-city or Neustadt was founded by Count Adolf of Schauenburg-Holstein. In 1215 the two cities were united under the counts of Holstein, and since 1461 the Kings of Denmark. Although the Kings of Denmark were the official overlords, the city was practically independent.

The oldest known seal dates from 1241, on which is shown a castle made of three towers. The cross on the middle tower as well as the two stars are already present. The middle tower could thus indicate the largest church, the Holy Mary Church. The stars are aslo a common symbol for the St. Mary. All other seals of the city show the castle, the shape, however, differs between the seals. On some smaller 13th -14th century seats the castle is standing on a river and the stars are replaced by a half-moon (crescent). The castle also appears on coins minted in the 13th century.

In Napoleonic times the colours were inverted (a red castle on a silver shield), as the addition of a red chief with the golden bees (the symbol of a city of the first order) did not fit with a red shield.

The whole arms as they are now were first used officially in 1695 and were officially granted in 1835. The only municipality is Hamburg, after the merger of 33 municipalities in 1937.

As far as known the colours have always been a silver castle on a red shield.

The arms in the city

(more images wanted, if you have an image of the arms in the city, please contact me):

The arms on coins of the city