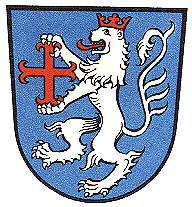 The arms show the lion of the Counts of Everstein, who until 1429 ruled most of the district (see also Holzminden). The cross is taken from the arms of the Counts of Schwalenberg, who ruled over Pyrmont until 1494. Later the area was ruled by the Princes of Waldeck.