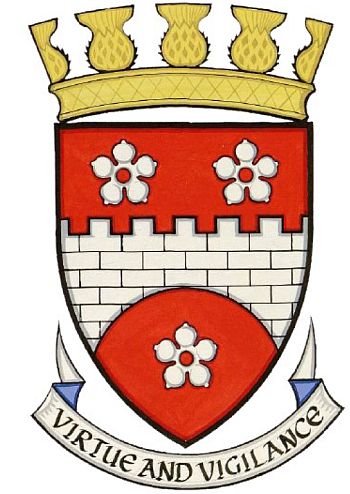 Above the Shield is placed a coronet appropriate to a statutory District, videlicet:-a circlet richly chased, from which are issuant eight thistle-heads (three and two halves visible) Or; and in an Escrol under the Shield this Motto "Virtue and Vigilance".

The arms show the arms of Hamilton, but with the addition of the embattled bridge. The bridge symbolises Bothwell bridge, the oldest bridge in Lanarkshire, dating from 1486.

The motto "Virtue and Vigilance" is a combination of the mottoes of Hamilton Burgh and Lanarkshire. 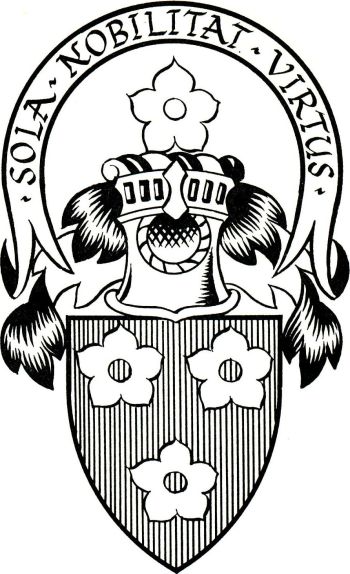 Above the Shield is placed a suitable Helmet with a Mantling Gules doubled Argent, and on a Wreath of the proper Liveries is set for Crest a cinquefoil pierced as in the arms, and in an Escrol over the same this Motto "Sola Nobilitat Virtus".

Hamilton appears in 1475 as an existing Burgh of Barony of James, 1st Lord Hamilton, and was made a Royal Burgh in 1548-49 under his grandson, James,2nd Earl of Arran, Regent of Scotland (1542-1554), but the Charter proved ineffective. In 1669, it was created a Burgh of Regality in favour of Anne, Duchess of Hamilton.

The arms are based on the version of the Hamilton family arms which are reputed to have been given to the Burgh by Duchess Anne. They have the pierced cinquefoils in silver instead of ermine.
The cinquefoil crest has obvious Hamilton connections while the Latin motto-"Virtue alone ennobles"-is that of Hamilton, Earl of Arran.

The three cinquefoils were also used by the Lanarkshire council.