From Heraldry of the World
Your site history : Hamont
Jump to navigation Jump to search 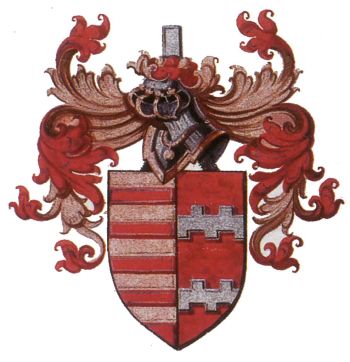 Hamont historically was part of the Grevenbroek Estate, which until the end of the 14th century was ruled by the Lords of Grevenbroek, a branch of the Arkel family. In 1401 Jan van Beieren, Prince-Elect of Liège conquered the town and added the estate to the County Loon.

The local council used a seal with the local patron saint, St. Lawrence. However, another seal from Hamont is known from 1767 with the arms shown above. The arms are a combination of the arms of Loon (red and golden bars) and the arms of Arkel. The crest shows a battlement, the origin thereof is not known. In 1920 is twas decided to use this combination as arms for the city and not St. Lawrence.