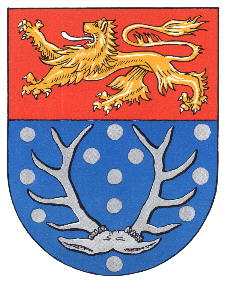 The lion in the upper half is the symbol of the 'Grossen Freien' an ancient free territory to which the village belonged. The lower half shows the arms of the Counts of <a href=d/dassel|Dassel]], the oldest known Lords of Harber, who became extinct in 1329.