From Heraldry of the World
Your site history : Harrow
Jump to navigation Jump to search 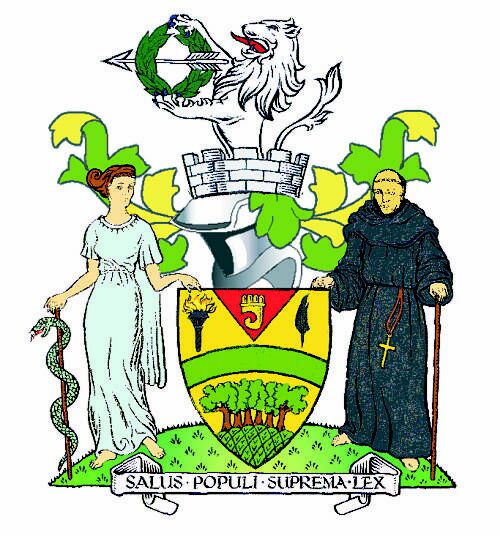 Arms : Or a Fesse arched Vert in chief on a Pile Gules between a Torch Sable enflamed proper and a Quill Pen of the fourth a Clarion of the first and in base upon a Mount issuant a Hurst of Trees of the second.
Crest : Issuant from a Mural Crown proper a demi Lion holding between the paws an Arrow fessewise Argent enfiled with a Wreath of Oak also proper.
Supporters : On the dexter side a representation of Hygeia supporting with her exterior hand a Staff entwined with a Snake and on the sinister side a Benedictine Monk supporting with his exterior hand a Staff all proper.
Motto: 'SALUS POPULI SUPREMA LEX' - The well-being of the people is the highest law

The shield illustrates the various parts of Harrow. The green bar represents the green belt around London in which much of the borough lies. The flaming torch of knowledge is for Harrow School. The quill pen is for Pinner, where several famous authors have lived. The red pile stands for The Gore and for the Chandos family. The clarion or organ stop is for George Frederick Handel, who lived and worked in the area. The trees depict Harrow Weald and the mound Harrow-on-the-Hill.

The crest is made up of charges from the arms of Harrow School.

In 1954 the town gained a Charter to become a borough and supporters were added to the arms. The dexter supporter is the goddess Hygeia and she recalls that Harrow was once a health resort. The sinister supporter is a Benedictine monk He recalls the many ancient religious houses of the district.

The motto means The Welfare of The People is the Highest Law and is used by many English towns.