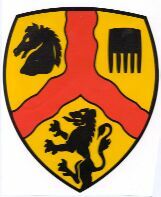 The arms were officially granted on February 6, 1974.

The arms were designed after the merger with Greffen and Marienfeld and are based on the older arms of the Amt Harsewinkel and the previous arms of Harsewinkel. In the new arms the colours of the arms of the Amt were changed and the daisy for Marienfeld was replaced by the black lion, also taken from the old arms of Marienfeld. The comb of Greffen was placed in the upper left corner. The horsehead for Harsewinkel remained. 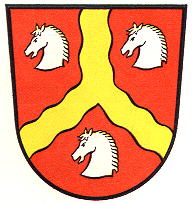 The arms are canting, the name is derived from Rosswinkel (Ross=horse). The wavy bars represent the many streams and rivers in the area. The colours are taken from the arms of the State of Münster and the County of Ravensberg, to which the city historically belonged.

© since 1995, Heraldry of the World, Ralf Hartemink New arms from http://www.harsewinkel.de