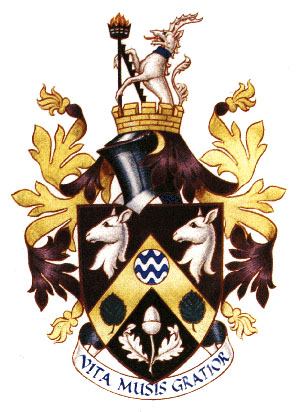 Arms : Per chevron Purpure and Sable on a Chevron Or between in chief two Hinds' Heads erased and in base an Acorn slipped and leaved Argent a Fountain between two Hazel leaves proper.
Crest : Out of a Mural Crown Or a demi-Heraldic Antelope Argent collard Azure supporting a Beacon Sable fired proper, Mantled Purpure doubled Or.
Motto: 'VITA MUSIS GRATIOR' - Life is more satisfying through the muses

The arms were officially granted on December 9, 1959.

The shield is almost a map in effect, with Haslemere between Hindhead and Blackdown. The chevron indicates the hilly situation of the area; resembles a gable and thus denotes a residential area and it so recalls the chevron-like pattern characteristic of Haslemere pottery. Upon the Chevron are two Hazel leaves and a wavy roundel that suggest the name Haslemere. Above the chevron are hinds heads which, on purple, suggest the heathery lands of the Hindhead area. Below the chevron the black "hill" suggests Blackdown and the acorn with its sprig of leaves is from the arms of Surrey and also, as the National Trust's emblem, a reminder that the Trust owns much local land.

The mantling is purple and gold. These colours suggest the local abundance of heather and gorse and are also indicative of local Royal patronage. The crest is a white antelope adapted from the crest of Mores of Losely who held the Manor of Godalming (which included Haslemere) after the Bishops of Salisbury who are also represented on the crest by a blue collar. The beacon is a reference to Beacon Hill and a symbol of the iron industry that was once so active in this area.

The motto Vita Musis Gratior (life is more satisfying through the muses or arts) reflects the many cultural activities of the town and its many links with famous artists, authors, poets and musicians.