From Heraldry of the World
Your site history : Hassbergen
Jump to navigation Jump to search 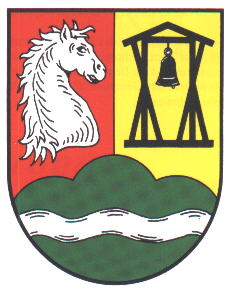 The horse head in the arms symbolises the importance of agriculture for the village, the historical trade routes and the shipping on the Weser river. Historically barges were pulled by horses along the river. At the same time a white horse in red is the symbol of the old Kingdom of Hannover and the State of Niedersachsen, to which the village belongs. Finally, many old farms bear a (wooden) horse's head on the top of the roof.

The bell tower is a typical tower used near the local chapels. The colours gold and black are those of the County Hoya, to which the village historically belonged.

The base shows the geographical situation, green hilly farmland and the Weser river.