From Heraldry of the World
Your site history : Hassel (Weser)
Jump to navigation Jump to search 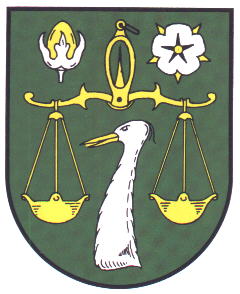 The haselnut is a canting element (Hasel), the name is derived from Haslo, or 'place near the hasel forest'. The rose and the crane's head are taken from the arms of the medieval Lords of Hassel, known since 1219.

The scales are a symbol of justice and symbolise the fact that during many centuries criminals were executed in the village, condemned by the court of the Amt Hoya. The last criminal was executed in 1846.