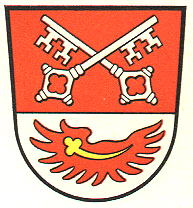 The oldest seals of the town show the patron saint, St. Walburgis dressed as a nun, sitting on a throne and standing before her a small shield with the two crossed keys. This composition was also used informally as arms for the town, but in 1939 it was seen as inappropriate to use religious symbols on coats of arms hence the above arms were designed.

The arms of the Lords of Berg, who lived in the Schalksburg castle in town until 1398 never appeared in the seals of the town.