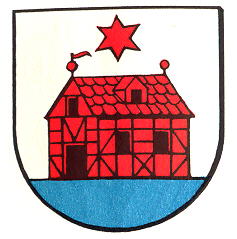 The arms are canting (Haus = house), and have been used as the symbol of the town since the 15th century. All later seals and arms show a house. The actual style of the house changed through the centuries, according to the custom of the time. The star was added in the last century, and was formalised in the arms, when the latter were officially granted in 1939.