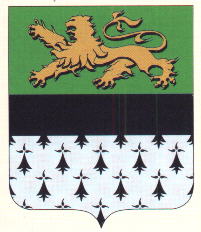 The arms are as far as I know not officially adopted, but were proposed in 1994.

The arms are based on the arms of the oldest known arms of a Lord de Havrincourt, a golden lion in a green field. The lower half of the arms is derived from the arms of the Cardevacque family, Lords of Havrincourt in the late 17th and 18th centuries.