From Heraldry of the World
Your site history : Hechingen (kreis)
Jump to navigation Jump to search

State : Baden-Württemberg
Incorporated into : 1973 Zollernalbkreis and small parts to Freudenstadt and Rottweil 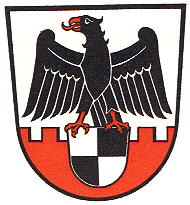 The arms show the shield of the Counts of Zollern. The Counts of Zollern-Hechingen, one of the branches of the main family, owned an area which is nearly identical to the area of the district. The wall represents the Hohenzollern castle, from which the Prussian royal family descended. The Prussian eagle represents both the family as the fact that the district belonged to Prussia from 1850-1945.