From Heraldry of the World
Your site history : Heemsen
Jump to navigation Jump to search 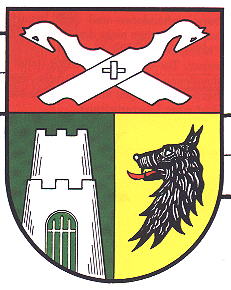 The castle symbolises the two historical castles in the area, the Andertenburg and the Brunsburg. The chief shows two horse-heads, shown in a typical fashion used as roof ornaments in the area. At the same time the horses symbolise the Kingdom of Hannover and its successor, the State of Niedersachsen, to which the area belongs. The wolf was historically a common animal and as late as in 1948 farm animals were killed by wolves. The gold and black colours are those of the Counts of Hoya, to which the area belonged until the 17th century.