From Heraldry of the World
Your site history : Heidelberg
Jump to navigation Jump to search 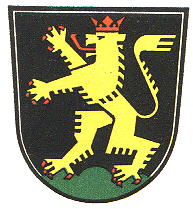 The arms were officially adopted in 1898. The image shows the arms as established in 1969 in a rather modern style.

Heidelberg became a city in the early 13th century. The city was part of the diocese of Worms and was transferred to the Pfalz in 1225. The first known seal of the city (known from 1257) only shows an (imperial) eagle. In the 14th century the seals show the lion of the Pfalz, with on his breast the arms of the Wittelsbach family (see the arms of Bayern), who at the time were counts of the Pfalz. The small Wittelsbach arms disappeared later in the century and around 1400 the crown was added. The arms of the Pfalz also showed a crowned lion. The three-topped mountain was added in 1436 and may be a canting symbol and at the same time symbolises the three mountains surrounding the city.

The seals of the city: