From Heraldry of the World
Your site history : Göttingen (kreis) > Heilbronn (kreis)
Jump to navigation Jump to search 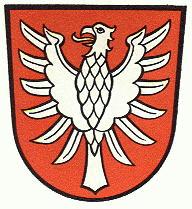 The clawless eagle was the arms of the Counts of Lauffen, who ruled the area until the beginning of the 13th century. As the city of Heilbronn also uses an eagle, it was chosen as a representative symbol.

The arms replaced arms used by the district since 1928. These arms showed a wheat-ear, hammer and some grapes around an escutcheon with an anchor. These arms represented the different industries in the district, agriculture, mining, viniculture and the harbour at the Neckar.