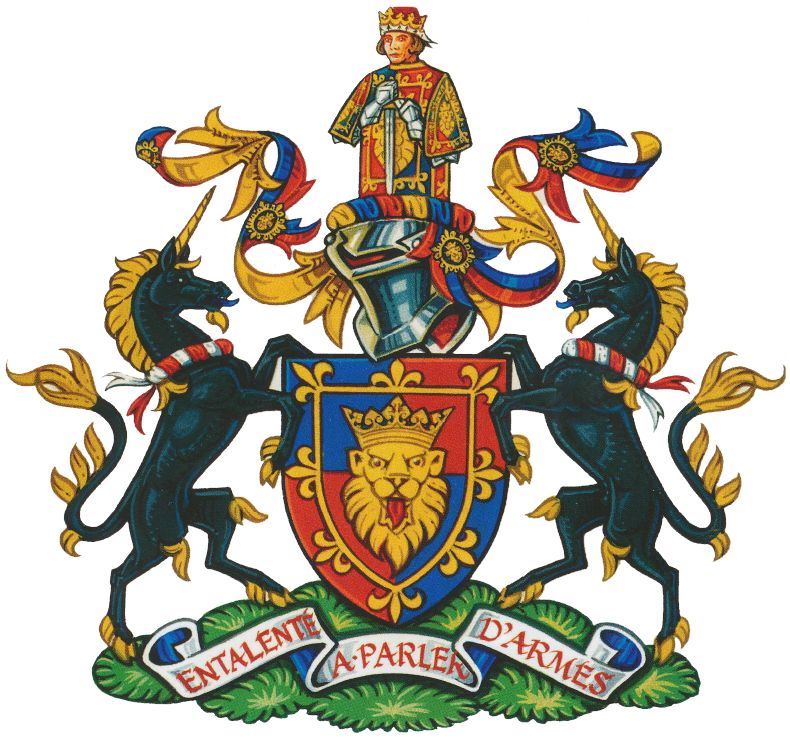 Arms : Quarterly azure and gules, a lion's face crowned with an ancient crown Or within a tressure flory on the outer edge of the same.
Crest: On a wreath Or, azure and gules, A demi figure of a knight in armour, habited in a tabard of the Arms, his hands gauntleted proper, the dexter holding the hilt and the sinister resting on the quillons of a sword, point down­ ward, also proper, hilt and pomel Or, on his head a chapeau gules turned up ermine encircled by an ancient crown gold. Mantled azure and gules, doubled Or.
Supporters: On either side an uni­ corn sable, armed, unguled, crined and tufted Or, wreathed about the neck with a torse argent and gules.
Motto: Entalente a parler d'armes

The arms represent the essence of heraldry. They are suggestive of the ancient Royal Arms, they contain the face of that most heraldic charge the lion, crowned with an ancient crown and the graceful single tressure flory, which has about it a suggestion of Scotland with the fleur-de-lys. Its continuous line is, of course, symbolic of the eternal unity of the Society. The knight with sword reversed and no helmet on his head symbolises chivalry and nobility of purpose. His tabard and armour are those worn in about 1484, the year in which the College of Arms was first incorporated.

The supporters are taken from the crest of Mr. J. P. Brooke-Little, the founder of the Society, their red and gold collars being here replaced with a torse of the Duke of Norfolk's livery colours, his Grace being the first President of the Society.

The motto, taken from a mediaeval poem 'Le Tournoi de Chauvency', may be translated, 'Able to speak of arms'.