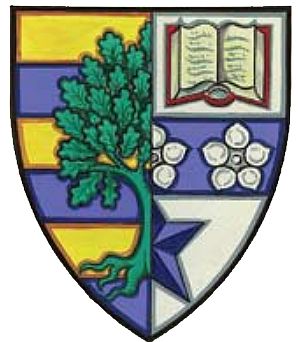 Per pale, two coats both demidiated; dexter, barry of six Or and azure, an oak tree eradicated vert; sinister, argent, on a fess azure between an open book undemidiated, binding gules, in chief proper, and a mullet in base of the second, three cinquefoils of the first.

The arms are those of the former Heriot Watt College, but without the compartment, supporting engine and motto.