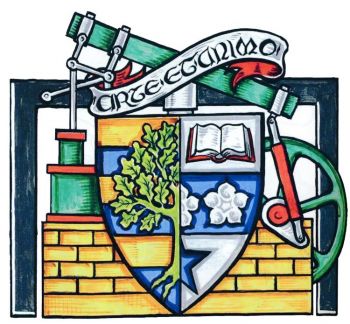 Per pale, two coats both demidiated; dexter, barry of six Or and azure, an oak tree eradicated vert; sinister, argent, on a fess azure between an open book undemidiated, binding gules, in chief proper, and a mullet in base of the second, three cinquefoils of the first; and on a compartment below the shield, being of brickwork Or masoned sable, are set for a supporter, and as part of the same, a beam-engine, frame sable, cylinder, flywheel and beam vert, the cylinder and wheel garnished gules, the piston rod and the garnishing of the beam argent, guiding rods gules garnished argent. And as a motto Arte et Animo.

The arms were officially granted in August 1958.

The right half (the left side, to the viewer) is made up of six bars alternating in gold and blue, derived from the coat-of-arms matriculated in England by James Watt’s son, with superimposed on this a green tree, which is included in the heraldic design for the Arms of Watt and Watson in Scotland.

The left half is derived from half of the Heriot coat-of-arms, as used by Heriot’s School. In this section, the design includes a central blue bar with one and one-half cinquefoils in silver. Above and below this are silver bars; the lower has half of the five-pointed star of the Heriot shield in blue, and the upper has an open book to indicate the educational status of the owner.

The whole is placed on a compartment and as a 'supporter' a beam-engine as designed by Watt.

The motto is Arte et Animo.

The shield was later granted to the Heriot-Watt University.