From Heraldry of the World
Your site history : Hersfeld (kreis)
Jump to navigation Jump to search 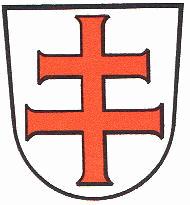 The arms show the old arms of the Hersfeld abbey (see also the arms of the city of Bad Hersfeld). The cross first appears in the seal of Abbott Lüdwig (1217-1239) together with the patron saints of the abbey, St. Simon and St. Thaddeus. It is claimed that the cross goes back to the founder of the abbey, Lullus, Bishop of Mainz, in 770. The abbey was very powerful in the area, thus the cross was chosen as the arms for the district. The abbey lost its power after the reformation and the conquest of the area by the Counts of Hessen in the late 16th century.