From Heraldry of the World
Your site history : Hertfordshire
Jump to navigation Jump to search 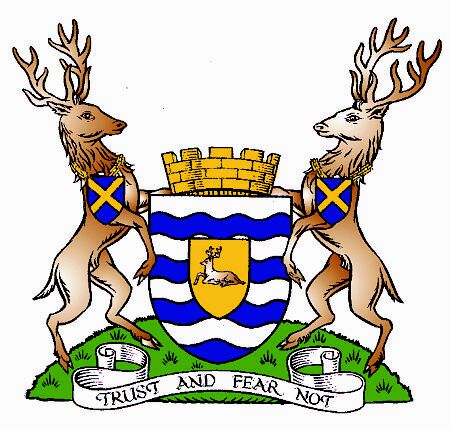 Arms : Barry wavy of eight Azure and Argent an Inescutcheon Or charged with a Hart lodged proper. The shield surmounted by a Mural Crown as a Crest.
Crest : On either side a Hart proper gorged with a Chain Or pendant therefrom an Escutcheon Azure charged with a Saltire Or.
Motto: 'TRUST AND FEAR NOT'

The arms are based on those of Hertford, the County town. Before 1925 the County Council used a shield quartered of the arms of Hertford and Saint Albans.

In the 1925 grant the hart supporters have a shield bearing the arms of Saint Albans. The motto was that of the Lord Lieutenant at the time of the grant.