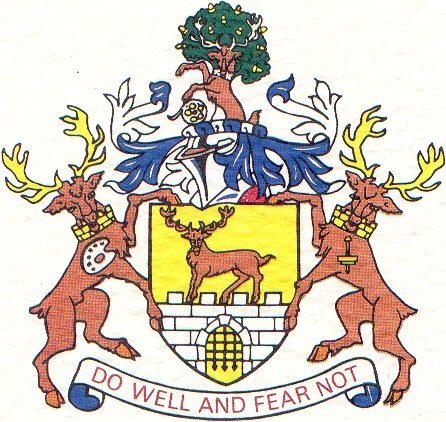 The arms were officially granted on September 5, 1975.

The shield represents the name Hertsmere, meaning the boundary of Hertfordshire county (with Greater London). The hart from the County Council arms stands on a battlemented wall, representing the boundary. The portcullis is raised to show the free passage between the two counties.

The crest has blue and silver torse wreath and mantling - the livery colours of Hertfordshire county Council. The crest itself represents the centre of the district - the Elstree and Aldenham areas. Elstree RDC had arms featuring an oak tree -Tidwulf's tree - from which the village is named. The oak tree also represents Aldenham, as an oak featured in the device of Watford RDC. In front of the tree is a hart supporting spool of film for Elstree's film studios.

The supporters are both Hertfordshire harts. That on the dexter represents Bushey, in the west of the borough. The hart is charged on the shoulder with an artist's pallette, from the device of Bushey UDC. The sinister supporter is for Potters Bar, in the east of the borough. He is charged on the shoulder with a potter's wheel, from Potters Bar UDC's unofficial arms.

The motto is DO WELL AND FEAR NOT. This was used by Elstree RDC and is inscribed on the inside of Shenley Cage. It is also very similar to the motto of Hertfordshire County Council.