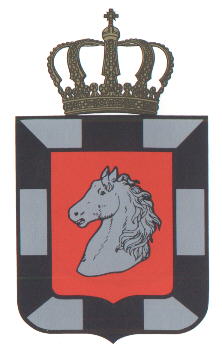 The arms were granted by the Prussian King as the Duchy had become part of Prussia in 1865. The arms were discontinued when the Duchy was made a district in 1876. Country districts were not allowed to use separate arms in Prussia. The district continued to use the arms when Prussia ceased to exist in 1918.

The Duchy belonged to Denmark until 1816 and from 1816-1865 it belonged to the Kingdom of Hannover. The horse is taken from the arms of the Kingdom of Hannover, but the horse was made of gold to distinguish it from the arms of Hannover. The Danish Kings also used a white horse for Lauenburg, to emphasize the claims on the Duchy after 1816. In 1866 the original colours were restored and the chequered border in Prussian colours was added to distinguish the arms. The arms may be used with a golden crown since 1866.