From Heraldry of the World
Your site history : Heuchelheim (Reichelsheim)
Jump to navigation Jump to search 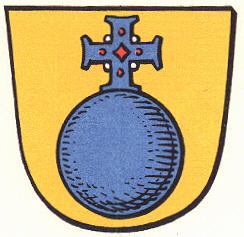 The arms show an orb as a symbol of Justice, as in the Middle Ages there was a court in the village. The orb also appears, surrounded by palm leaves, in the oldest known seal of the village, dating from 1677.